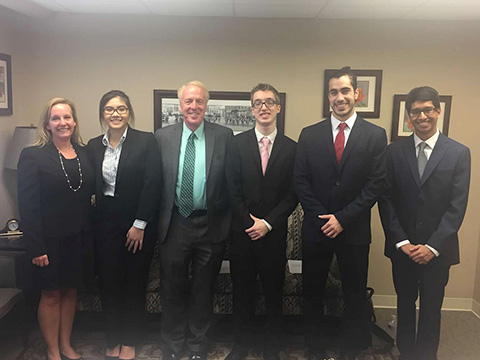 Each year, senior government students at Centreville High experience the lawmaking process as participants, writing bills related to problems or issues in Virginia. Among the ideas for bills this year were to outlaw the sale and use of neonicotinoids to reduce honeybee devastation; prohibit citizens with records of child abuse or endangerment to work as a substitute teacher; exempt menstrual products from sales tax; prohibit smoking in state and local parks; forbid large trucks to use the fast lane on highways; decrease the speed limit in school zones to 15 mph; and change domestic violence from a Class 1 misdemeanor to a Class 6 felony.

Le, Faccini, Mazumder, and Strauch defended SB418 before the Senate Commerce and Labor Committee in January.  According to teacher Cathy Ruffing, “One of the most compelling arguments for the bill was the lack of text 911 service during the Virginia Tech shootings.  Students were afraid to speak (because of the active shooter) but Montgomery County did not accept texts to 911.  Students were texting friends and parents who called 911 but were reaching the 911 service where they reside, then being connected to Montgomery County. Obviously, this cost precious moments in such a crisis.”